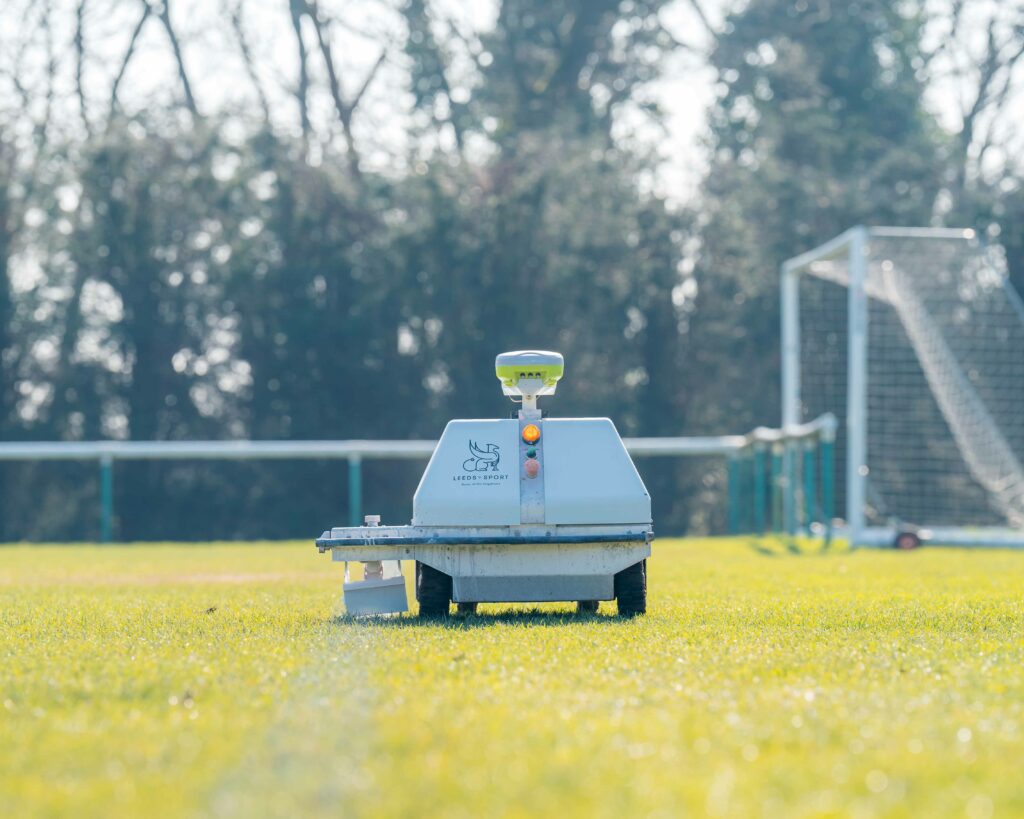 For all the sports facilities that need to be maintained at the University of Leeds, manual line marking proved to be a challenge. A laborious process that lead to inconsistent markings and sacrificed the standard of the pitches pushed the grounds managers to look for an alternative.

The University opted to automate the line marking process with a Turf Tank robot, which ensures consistent results with every marking and releases the time pressure on grounds managers. With their new assistant on the pitch, the staff now have more time to dedicate to other jobs and increase the standard around the site.

Established in 1904, The University of Leeds is renowned globally for the high quality of teaching and research it provides for its students. Its strong commitment to student education goes beyond the classroom and the university combines the academic excellence with an extensive sporting experience.

Every week, hundreds of students train, receive coaching, and play matches on the facilities at the University of Leeds. But to create and maintain a high level of professionalism at these facilities, there is no room for sacrifice.

David Thackray, Head Groundsperson, looking at the results created with the manual line marking process, realised the pitches do not raise to the expected standard and so decided to investigate alternative solutions.

The main reason why I started looking around at autonomous markers was because it makes everything more consistent, more professional.”

The grounds managers at the university have to maintain a big site, with a wide range of pitches of different layouts and sizes. Managing such a massive operation became a logistical nightmare and the grounds crew found themselves pushed by two forces. On one hand, the crew felt the time pressure of all the tasks that needed to be completed in a short period of time. And on the other, they needed to ensure the pitches achieved the level of excellence the university strives to provide.

“On a site as big as this, we can’t use string lines all the time. It’s just a logistical nightmare”, continues Robbie Thackray, Groundsperson. “So, we are freehand marking quite a lot of the time, but you don’t have the same quality.” 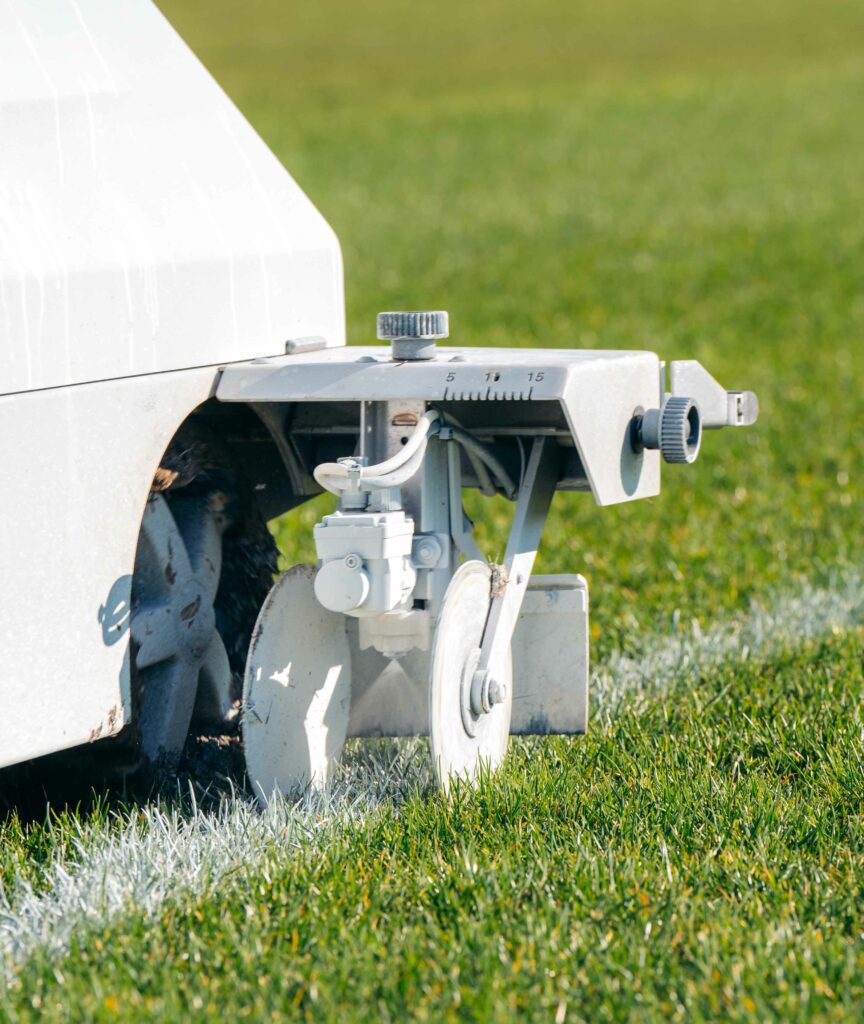 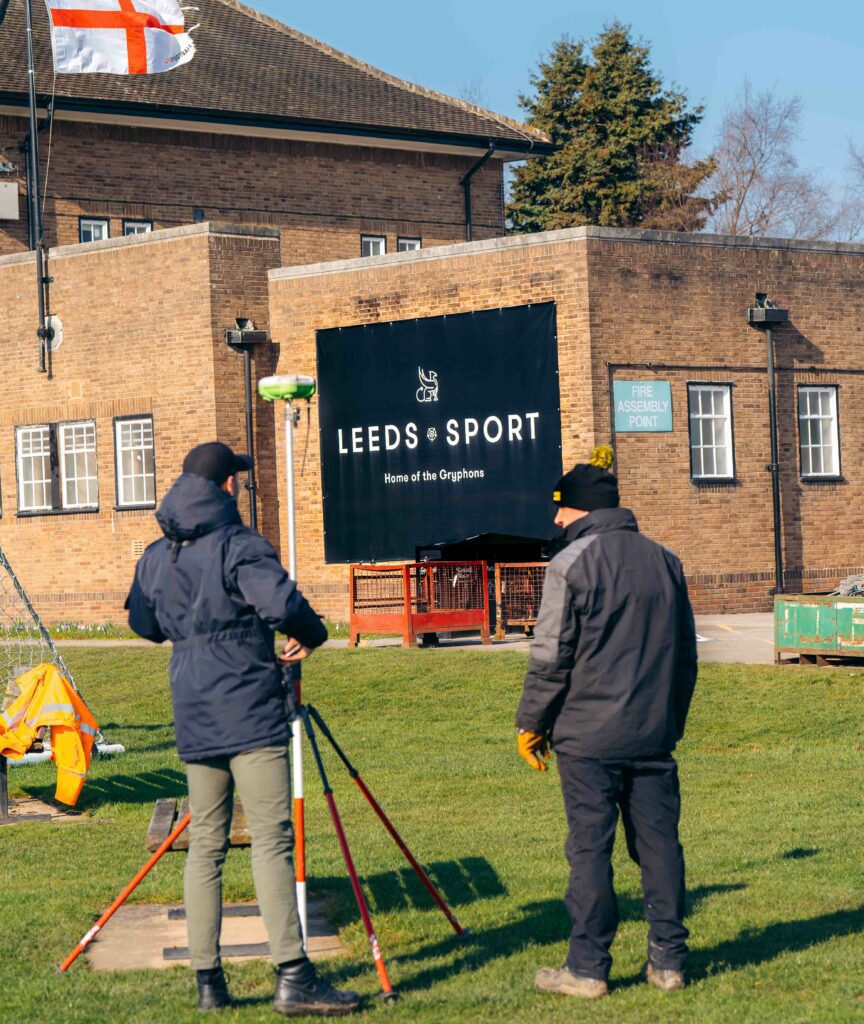 Due to its advanced GPS technology, the Turf Tank robot ensures consistent markings every time and releases the grounds managers at the university from using strings and manual measurements.

With the Prostripe robot-certified paint the staff has a ready-to-use product that doesn’t require mixing, reducing, even more, the effort and eliminating the guesswork in finding the right dilution level. “Now we’re ready mixed, we know exactly how much paint we’re using”.

Naturally, no two people are the same and no two grounds managers can have the same walking patters and same speeds while pushing the line marker. The Turf Tank robot proved to be of benefit in this aspect as well. With the robot, the grounds crew now have a reliable assistant on the pitch, which eliminates the human error and ensures consistent results for the entire pitch and with every marking.

It’s impossible to get the same quality without a robot.”

The University of Leeds takes pride on the large variety of sports it offers for its students. But for those in charge of maintaining the pitches raising to the expectations is not an easy job.

David and his team have to maintain a wide range of pitches of different uses and sizes, from football and rugby to American football, lacrosse, ultimate Frisbee.

Keeping the entire site in pristine condition entails a lot of effort and attention to detail. Especially at the start of a new season, the entire site goes through a large transformation and the grounds managers prepare the grass for all the new sports that are going to be played.

For example, when the winter season starts, the stage is set for all winter sports at once. That means the large number of tasks that need to be completed in a short period of time put a lot of pressure on the backs of the grounds people.

Setting up a pitch from scratch used to be a time-consuming task when David and his team had to do it manually. Initial marking a football pitch used to be a job for two men who needed to drag strings, measure, and push the line marker for about two hours. With the new setup, the same job could be completed in just 20 minutes by the robot, and in the time it marks the pitch, the crew is free to tend to other tasks around the facility.

“During the summer months, there’s a lot of grass and streaming that needs to be done. So once you’ve set your pitch up, and your robot’s ready to mark, you can go ahead on the perimeter fencing with the streamer. And by the time you’ve got around the perimeter fencing, the pitches are marked out.”

As time-consuming as line marking used to be, it was a critical part of the job, because without lines there is no game. That means that many other tasks were very often neglected. But now with the time saved on marking pitches, the crew can dedicate more energy towards those tasks, which overall improves the standard around the site.

TO DRAW THE LINE

Turf Tank ONE proved to be a reliable assistant on the pitches at the University of Leeds, saving grounds managers a considerable amount of time and enabling them to dedicate more energy to other tasks which help raise the standard of the facility.

Get yourselves a demo. Get the robot onto your site and look at it for yourself. Until you see it in person and how easy it is to use, you won’t actually believe it’s that easy.”